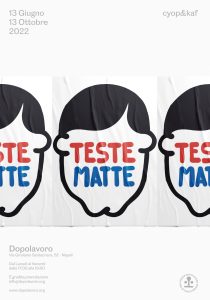 We have always intented Design as a possible space for relationships and practices, as well as for projects.
Since 2010, this space has been a collection of places such as corners of living rooms, vans, damp basements, poorly insulated workshops, garages, warehouses and various spaces rented at failed urban regeneration projects, as well as at our other personal projects, which have also sometimes – and naturally – finished.
We have often taken for granted that it was always necessary to perform, when rather it was precisely the debacles that defined paths, expectations, relationships and even skills.
We re-open Dopolavoro to the city with cyop&kaf, whom we met during the years of these crazy heads.
Not rarely we have found ourselves sharing pieces of the road with them.
There will be no inauguration, because nothing would be more unnatural in what is, naturally, a continuation.

In the last twenty years I have changed more than one studio. Each move has been an excellent opportunity to get rid of unsuccessful attempts, accumulated objects, fetid paint. It was precisely during one of these moves that an old roll of posters reappeared, saved who knows how from the urban stickers of days gone by. Seeing them again more than ten years later was alienating. In the meantime, things have changed irretrievably, public art has subjugated itself to the point of becoming an enemy (but I have already written this), sticking them up in the street would no longer make any sense. If there is any value in looking at these crazy heads today, it lies in the fact that they testify to the naive and desperate attempt to establish contact with a humanity that was also moving in those very years: into the luminescent, unexplored and exploring digital continent. (cyop&kaf)

Go to the Store